About the Mini-Club Program

The Franklin Volleyball Club was launched in the fall of 2019 with a U14 team (7 players). The team earned two 1st place and one 2nd place finish in Mini-Club tournaments, and concluded their season at the AAU Winter Kickoff Classic, placing 3rd out of 10 teams at the U15 level. All of our team members continued to play during the 2020 club season; of the six players matriculating into Franklin High School, 2 made the Varsity team, 3 made the Junior Varsity (JV) team, and 1 made the Freshman team as 9th graders.

In the fall of 2020 we formed two teams (24 players) and, limited by COVID restrictions, held internal scrimmages and tournaments. Over 85% of our players played on a club team during the 2021 club season, with over half of our athletes playing up a level and/or on elite club teams. All 10 rising 9th graders are gearing up for high school tryouts this fall.

Register for Tryouts for the Fall 2021 Mini-Club Team

Our Blue (elite) and White (2nd team) teams will comprise 8 - 10 players each and train on Wednesday evenings for 90 minutes (TBD) and Sundays for 2 hours (4 - 6 pm). Players will receive a team jersey and a practice shirt and participate in the following events:

Participation includes an annual AAU membership. The cost of the 13 week program is $595 (split into two payments).

The practice team will comprise 10 - 12 players and train on Wednesday evenings for 90 minutes. Players will receive two practice shirts for scrimmages and have the option of participating in a few informal tournaments / matches (example, see October 16 OR 17 in the table above).  The cost of the 10 week training program is $225.

For more information about the Fall 2021 Mini-Club program, please contact Cathy Sanford at This email address is being protected from spambots. You need JavaScript enabled to view it.. 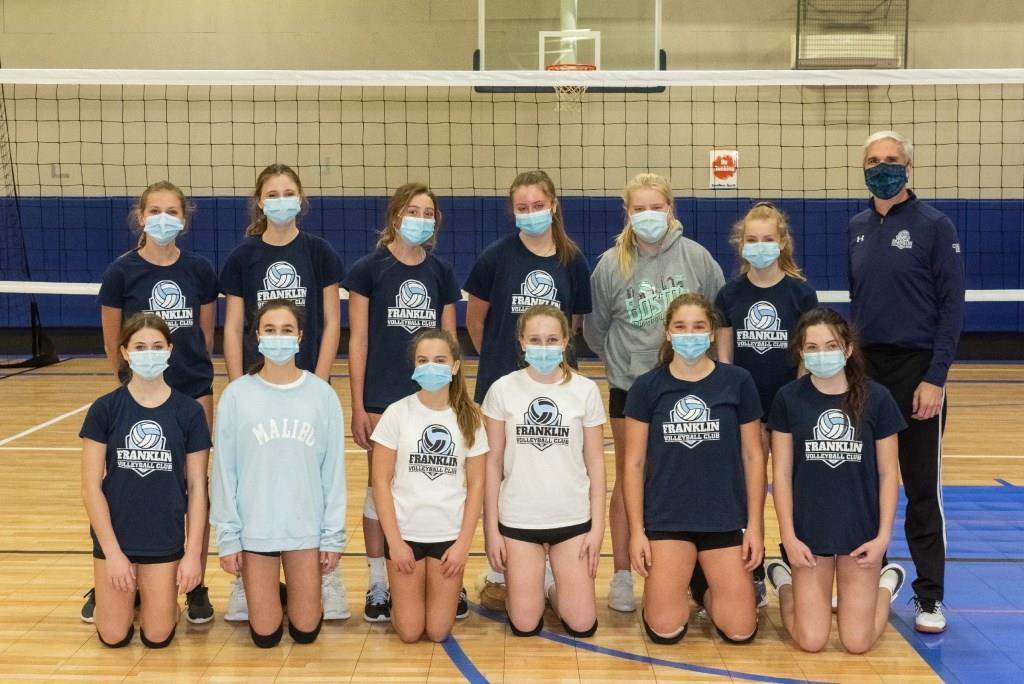 As the founding coaching team of the Franklin Mini-Club program, we hope to meet the growing demand for competitive volleyball opportunities at the middle school level. Few sports require as much teamwork and communication as volleyball. We seek to build skills, self-esteem, confidence, and a true sense of team within a coaching environment that values effort, persistence, and a positive attitude. We continuously strive to balance skill work, game play, and the development of volleyball IQ in our young athletes. Above all, we seek to build a positive atmosphere of trust and respect that supports learning and the development of lasting friendships.

“Franklin is so fortunate to have Eric, Cathy and Megan create the Franklin Mini-Club program. The coaching team is top-notch. They have the ability to identify each girl's strengths and weaknesses and then formulate a plan to make them stronger and better. Running drills is one thing, but fine-tuning skills is a totally different level of coaching.” “Mini-Club not only prepared my daughter for club tryouts this year, but also provided her a competitive advantage as she competed in tournaments during the Fall.”

“Playing for the Franklin Elite Mini-Club was a phenomenal experience for my daughters. The coaching they received from Eric, Cathy, and Megan was always positive and informative -- combining high-impact, individualized instruction with their clear passion for the game. I only wish my girls had the opportunity to play again next year.”